Holland is the first non-English speaking country which started to actively promote training in the English language. In 2002 the country switched to European educational standards, in particular, was harmonized European standards degrees awarded to graduates. In the 2011-2012 academic year, the universities of the Netherlands offered 1560 accredited programmes in English in 2015-2016 – has 2100.

The government, both state and independent structures in the field of education the Netherlands is working actively to improve the access of foreign students to the Dutch education. These efforts are yielding results and the number of foreign students in the Netherlands is growing. In 2015 -16 academic year, foreigners accounted for 10.7% of all students studying in the country.

Universities Of The Netherlands

Most universities are located in cities and do not have campuses; faculties scattered throughout the city. In cities with a large number of the housing search may require time and effort. Typically, universities provide housing only for freshmen, and other students assist in the search options.

The academic year in the Netherlands

The academic year lasts in the Netherlands 42 weeks, begin studying in September or February. The academic workload is measured in ECTS credits, 1 credit equals 28 hours of training and 60 points academic year with a full load.

For the programs of bachelor, master, doctoral programs set their own academic load. Schools are required to monitor the attendance of foreigners, and at least once per year transfer this information to the migration Agency of the country responsible for issuing visas. If the academic load is less than 50% of the fixed annual, students can be expelled, and a student visa close.

Assessment in the universities of the Netherlands and attendance

The system of educational assessments in the Netherlands: from 1, very bad, to 10, excellent. The lower positive rating is 6, higher – usually 8 or 9, because 10 points can be very rarely, indeed, outstanding work.

General admission requirements to the universities in the Netherlands

• Document of completion of secondary school or University, depending on program level. The conformity of the documents on education of Holland and Russia here. The average score of the certificate or diploma is one of the most important selection criteria. Highest GPA greatly increases the chances of admission to universities of the Netherlands.

• The results of the test of English as a foreign language – IELTS, TOEFL, Cambridge English. For programs in English a minimum score of IELTS 6.0 for bachelor and graduate studies; 5,5 – for semi-annual training programs; 5,0 - per annum.

• Proof of funding for tuition and living in the Netherlands for at least 10 months.

Entry requirements are specified depending on the University and program. For details, see the websites of universities.

The same for all schools timing of acceptance of applications does not exist – universities set their own depending on the competition for a place, availability on campus and a number of other aspects. Because more time is required for paperwork and visa applications from foreigners wishing to study in the Netherlands, starts 1-2 months earlier than local students.

The deadline for applications:

• 15 January for programmes with a limited number of places, numerus fixus;

If space on the program numerus fixus ended before the official deadline set for the program closed.

Applications are filed through the formal system Studielink or directly to your chosen University – the application process need to be clarified on the website of the University.

Dutch universities offer preparatory courses for students whose level of English or knowledge items are not sufficient for admission. In addition, there are courses where you can improve knowledge of the Dutch language, then learn it. Preparatory courses last from 2 months to a year.

The approximate cost of study and residence in the Netherlands

Cost of programs depends on the level and type of program. These figures do not include the cost of textbooks, internships, etc., which is approximately from 500 to 2000 euros per year.

According to estimates of the Dutch immigration and naturalization, the cost of accommodation, meals, medical insurance, transport approximately 10350 euros per year, or 862,5 € per month. The amount fully covering tuition and accommodation for a year of stay, you may need as a financial guarantee for a visa and admission to the institution.

Scholarships and internships in the Netherlands

Scholarships for international students financed by both the government and the universities. Today students from Russia, Kazakhstan, Belarus, studying at the undergraduate and graduate programs and do not have Dutch diplomas from the previous levels, more than 60 scholarships.

The most famous scholarships for Russians – Orange Tulip Scholarships, read more about this scholarship can be found on the official website of Nuffic Neso Russia.

Many educational programs can include internships speciality. For example, in the undergraduate program BBA International Business Innovation Studies of the University of applied Sciences Inholland, there is a module "the Quandary", in which students work together on orders of the companies that require the resolution of issues in the field of innovation. And the third and fourth year students are directly acquainted with the world of business during an internship and working on senior project.

When making internships extra work permits in the Netherlands students are not required, just a student visa. The employer and student enter into a standard contract. The wage of an Intern is not regulated by law.

Work in Holland during and after school

Foreign students can work in the Netherlands 10 hours per week during the academic year or full-time in the summer. It is necessary to obtain a work permit and to issue the BSN.

Upon graduation, you can extend your visa for a year to find work.

Who can study in Holland for free,read here. 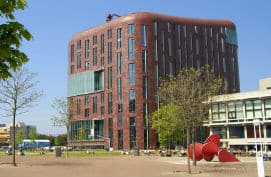