Just call! We know how to apply Get consultation free
Main page Higher education abroad News Residents of London are happy that they are going students from abroad

A recent survey of London residents conducted by the non-profit organisation London First, was aimed to find out how Londoners refer to the presence in the capital of the UK a significant number of foreign students coming from countries outside the EU.

It turned out that only 17 percent of respondents believe that students from abroad equate to immigrants. The survey showed that the vast majority of people in the capital find a lot of advantages that come to him to learn young people from around the world. Were noted the following positive aspects from the presence of foreign students:

The survey also showed that Londoners do not agree with the following statements:

CEO of London First, which carried out the poll, Baroness Jo Valentine commented on the results: "the London business alarmed by the shortage of talent resulting from the draconian policy of restricting the influx of highly qualified personnel. As a result, for example, the number of visitors to UK Indian students decreased by 2% over the period from 2011 to 2014. While our competitors, such as USA or Australia, began to attract more students.

We are satisfied that only 17% of London residents believe students from countries outside the EU, immigrants. Would be more correct to classify them as "temporarily staying in the country."

To attract to the UK more students from abroad and to stimulate our economy, it would be appropriate to once again impose visa for international graduates "poststudyworkvisa"that allows them to work in the UKfor several years after graduation".

London always attracts a huge number of students from abroad, and it houses a number of prestigious universities. A good reputation among foreign students enjoys Royal Holloway, which is since 1900 a part of the famous University of London. Royal Holloway is located in the picturesque and peaceful County of Surrey, which is just 40 minutes by train to Central London. University students can use all the elements of the city's infrastructure, London University, among them world – class library, professional employment and stunning student Congress hall, can accommodate 120 thousand students from 19 colleges of the University of London for official events, socializing and informal meetings. 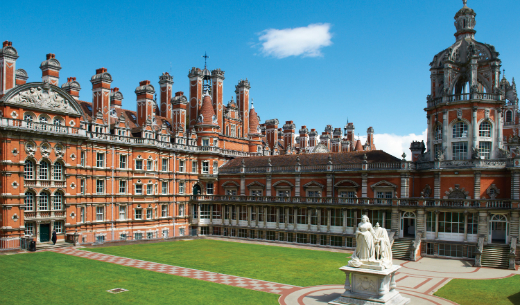 At Royal Holloway studying 7,700 students from 120 countries. The College has a special program for support and counselling of foreign students.

Published in the September 2015 annual review "rankings of universities in the world on 2016/15 year" from the prestigious publication The Times Higher Education rankings placed Royal Holloway on 129-th place in the world and 19-th position at UK. At the level of scientific research the College is included in the 25 percent of British universities have received the status of "world-class", from Research Excellence Framework in 2014.

Royal Holloway graduates receive a diploma of the University of London with a high rating amongst the employers, which opens to young people the brilliant career prospects.