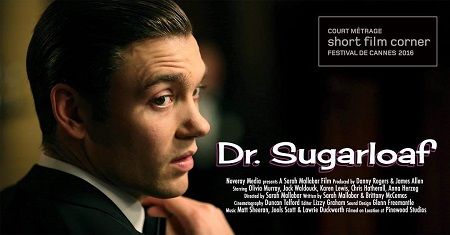 In may 2016 in the framework of the Cannes film festival hosted the premiere of the short film graduate of the University of Bath Spa Brittany Mccommas. The film is called "Sugarloaf Dr", Director and screenwriter (in collaboration with Sarah Mallabar) which was made by Brittany, tells the story of a saleswoman, a dream which mingled with the old film running on the TV in the store where she works.

Brittany, originally from the US, graduated from Bath Spa University in 2009 with a master's degree in screenwriting. As soon as she arrived in England, she quickly realized that she wanted to work in the field of production in the creative industry. "20 minutes after the beginning of my interview with professors Jonathan Neal and Doug Chamberlain I knew that this program is perfect for me. Could only hope and pray that I will be", - said in an interview with Brittany.

>> Program of the University of Bath Spa

Brittany believes that without the support of people whom she had met at the University of bath Spa, and has failed to reach such heights as the Cannes film festival. She commented: "Bath Spa University teaching is conducted not from the point of view of "if you succeed", but on the principle "when you succeed". Teachers give challenging assignments to force students to reach their potential, and after a while you become one family."

"Even after graduation you continue to meet new people and make friends. Graduates of the University of bath Spa constantly communicate and push each other to demonstrate the best that they can."

Brittany says, "you Never know where and when you get a new opportunity. Never give up. Never consider small achievements as something insignificant. They really can drive You to great heights, such as the Cannes film festival".

"When I conduct lectures and seminars for future writers, I always quote them the words of Ira glass: "the First few years your artwork will not be too good. They will strive, they will have potential, but they will not. But what made you want to start all this — your taste — is still with you... and all you need is just to struggle for success".

"My struggle was not easy, and I managed to write something it is because I never gave up. I learned at the University of bath Spa. Never give up".