After The Complete University Guide 2011 from the independent and the Times Good University Guide 2011 was published a University ranking 2011 "the guardian". Jessica shepherd, correspondent of the newspaper, gives some comments to the publication. University of Oxford tops the table of "guardian", for the sixth time pushing Cambridge into second place. The University of Warwick comes third and St Andrews fourth. This pair is swapped compared to the previous year. The ten best universities also includes the University College London, Lancaster, king's College London, London school of Economics, Loughborough and York. The oldest universities in the UK continue to occupy high positions in the ranking, although some of them yielded place last year. The University of Manchester, formed in 2004 from two established in the 19th century universities, fell from thirty-second place last year at 51-th of 118. Edinburgh moved up to 15th place from seventh last year, and Bristol – 33rd from 29th. Some of the universities founded in the 1960s, by contrast, showed growth. Lancaster, rapidly rose from 16th to 6th place this year, the University of East Anglia has risen from 35th to 19th place, and York moved from the 11th line on the 9th, which he held jointly with Loughborough.

17.02.10. English at GCSE level – a mandatory requirement for foreign students 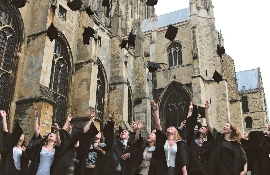