London has lost its position as the most competitive region of the UK according to new evidence published by the University of Wales Institute, Cardiff (UWIC) today.

The UK Competitiveness Index, a measure of the competitiveness of UK regions and locations first published in 2000, shows that for the first time London has slipped into second position and is surpassed by South East England as the UK’s most competitive region. The report shows that since the Labour government came to power in 1997 North West England has seen the greatest improvement in competitiveness, rising from 8th to 4th across the UK’s twelve regions.

The poorest performer is the devolved region of Scotland, which has fallen from 4th to 8th position. Also, the devolved region of Wales is now the least competitive economy in the UK. Other regions that have fallen down the rankings in recent years are the East Midlands, South West England, and Yorkshire and the Humber.

05.05.10. UK's first Financial Risk Academy to be established at Heriot-Watt 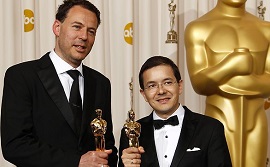 A graduate of the University of Bristol received the "Oscar"