From no matter where you hail, you can discover your true potential through the possibilities that await you at the University of Michigan. Since 1817, it has been encouraging students to explore all possibilities, to ask questions, and to challenge the present to create a better future. Today, U-M is one of the most distinguished public universities and a leader in higher education attracting top students and faculty from all over the world. Its size (more than 40,000 students), academic strength, impressive resources, and quality of its research provides an environment where students not only learn but also grow and challenge themselves by engaging with new people, cultures and ideas. The first American to walk in space, the creator of the iPod, the co-founder of Google, and the 38th U.S. president are all Michigan alumni.

The University was founded in 1817 as the Catholepistemiad, or University of Michigania. In 1821, it was officially renamed the University of Michigan. Originally located in Detroit, the institution’s home moved to Ann Arbor in 1837. One of the original buildings on the Ann Arbor campus still stands and is used today as the President’s house. The first Ann Arbor classes were taught in 1841, at which point the U-M had two professors and seven students. The first commencement was held in 1845 to recognize the graduation of 11 men. Women were first admitted in 1870. The University has grown to include 19 schools and colleges.

University of Michigan has one of largest alumni networks in the world (545,000+). U-M alumni include one U.S. President, two dozen governors, three Supreme Court justices and eight Nobel Laureates.

Students discover their passions and map out their futures in our 19 nationally recognized schools and colleges — the heart and soul of the U-M experience at Ann Arbor. While our U-M Dearborn and U-M Flint campuses provide inspiration and direction to more than 17,000 students. 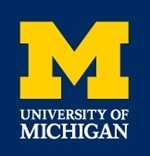 The city of Ann Arbor is considered one of the nation’s best college towns, and one of America’s most bike-friendly and sustainable communities, with art and culture everywhere — theater, music, literature, and lectures.