Mount Allison has been ranked Canada’s #1 undergraduate university by Maclean’s magazine more times than any other university. But that is not the only thing that sets the University apart.

Only at Mount Allison

Mount Allison University’s beautiful and historically rich campus is nestled on the Tantramar marshes in the heart of Sackville, New Brunswick, Canada. Mount Allison traces its roots to 1839 when Sackville merchant Charles Frederick Allison proposed the creation of a school of elementary and higher learning. The Mount Allison Academy, a school for boys, opened in 1843, followed by the Ladies College in 1854.

The College was granted the power to confer degrees in 1858. On May 19, 1863 degrees were presented to first two graduates, Howard Sprague and Josiah Wood. Twelve years later Grace Annie Lockhart became the first woman in the British Empire to receive a Bachelor degree when she graduated with her BSc.

The University attracts some of the most talented and creative minds from across the country and around the world. It has had 52 Rhodes Scholars — 11 in the past 13 years alone — and counts many of Canada’s top business, cultural, and community leaders among its graduates.

Maclean’s has ranked Mount Allison the #1 undergraduate university in the country for 18 out of the past 24 years — a record unmatched by any other university. Mount Allison has never ranked lower than second. The University received high marks in a number of different areas, including first place in its category in the national reputational survey rankings, as well as for student awards and library holdings.

The Globe and Mail Report Card

Mount Allison’s unique approach to the undergraduate experience was well represented in The Globe and Mail’s annual Canadian University Report. Mount Allison was highlighted for its immersive living and learning community approach in the feature “What size university fits you?”

The National Survey of Student Engagement (NSSE) — administered to thousands of students across North America — ranked Mount Allison first in student-faculty interaction and among the top in level of academic challenge, enriching educational experience, and student satisfaction. 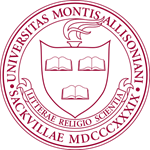