Charles University was founded in 1348, making it one of the oldest universities in the world. Yet it is also renowned as a modern, dynamic, cosmopolitan and prestigious institution of higher education. It is the largest and most renowned Czech university, and is also the best-rated Czech university according to international rankings. There are currently 17 faculties at the University (14 in Prague, 2 in Hradec Králové and 1 in Plzeň), plus 3 institutes, 6 other centres of teaching, research, development and other creative activities, a centre providing information services, 5 facilities serving the whole University, and the Rectorate - which is the executive management body for the whole University.

The University in Prague was founded by a charter issued on 7 April 1348 by Charles IV, King of Bohemia and King of the Romans, as the first Studium generale north of the Alps and east of Paris. Charles University is thus one of the oldest European universities. It was modelled on the universities in Bologna and Paris, and within a very short time it achieved international renown. It had four faculties: theology, liberal arts, law, and medicine. The academic community was comprised of teachers and students from the local area and further afield – but especially from the Central European region, for whom the University became an accessible and erudite Studium generale school. Charles’ son and successor Wenceslas (Václav) IV extended his influence over the University; in 1409 he issued the Kutná Hora Decree, by which he strengthened the status of Czech academic community members. Some of the masters and scholars left the Prague Studium generale in protest; this accentuated the University’s character as an institution with strong links to the Czech nation. 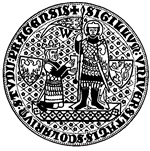